The Mantle team decided to do a MantleDrop ($MNTL airdrop) to early supporters, creators, and contributors rather than an ICO or an IDO.

MantleDrop can be summed up as a series of strategically selected community initiatives & drops to incentivize participation and raise awareness around $MNTL and AssetMantle.

MantleDrop is branched out into the following:

StakeDrop is a token distribution mechanism that allows token holders of some of the most prominent Proof-of-Stake networks to get exposure to $MNTL tokens (AssetMantle tokens). It’s designed to have near-zero principal risk.

AssetMantle will be running StakeDrop campaigns on 6 Proof-of-Stake networks as mentioned below.

Token holders of these networks can stake their native assets with any active validator to earn $MNTL tokens, in addition to the current network staking rewards they’re earning (block rewards and/or transaction fees).

Each participating wallet can earn up to a maximum of 5,000 $MNTL tokens. The cap is based on a few parameters that will be discussed in this document.

StakeDrop was first introduced to the crypto community by the team members at AssetMantle when they were building Persistence.

The hypothesis was that such an airdrop mechanism would encourage people to research the project and be active collaborators. Post the StakeDrop, the team’s hypothesis was proved right and $XPRT saw an appreciable price discovery and a strong community.

Hence, the Mantle team chose to go along a similar path and build a strong community within the Cosmos ecosystem to promote greater decentralization.

These tokens will be distributed over a period of 12 months following the token generation event.

Read more about the role of $MNTL in the AssetMantle ecosystem here.

The AssetMantle StakeDrop is designed in a way that benefits all stakeholders involved.

The following are the three key stakeholders:

The StakeDrop is a highly targeted method of an airdrop, allowing the Mantle team to distribute our tokens to the staking community. These stakers are long-term token holders, not mere speculators.

The core role of the $MNTL token is to secure the network.

The StakeDrop mechanism gives the perfect opportunity to ensure a wider distribution of $MNTL tokens amongst individuals familiar with staking, allowing us to bootstrap network security prior to launching the AssetMantle mainnet.

Key benefits for delegators participating in the StakeDrop are:

Benefits for networks we partner with are two-fold:

The mechanism is designed in such a way that the number of $MNTL tokens dropped each day increases linearly. The final dropped tokens will be the total tokens/rewards at the end of the campaign. This would then be distributed post the Token Generation Event (TGS)

For every StakeDrop campaign, any active validator on the respective network can earn $MNTL tokens.

Every block, “X” $MNTL tokens are dropped (the drop per block changes every day up to a certain day, after which it becomes constant till the end of the campaign, therefore X is a variable). These X tokens per block will be distributed amongst all delegators of the network participating in the StakeDrop, i.e. each unique address. The variable is based on the ratio of individual tokens delegated with respect to the total number of tokens staked on the network by StakeDrop participants. Let’s use the Cosmos Network StakeDrop campaign as an example to illustrate daily $MNTL drop rates.

As we can see from the graph above, the number of $MNTL tokens dropped per day increases linearly.

Any delegator who participates early is incentivized to keep their tokens staked for the entire duration of the campaign as the daily rewards continually increase.

The increase in daily rewards then stops and remains constant until the end. This is to ensure any delegators beginning late don’t get a very high percentage of tokens as rewards. It also ensures early delegators have much better incentives.

Understanding the StakeDrop Mechanism with an Example¶

For simplicity, let us assume that 1 $MNTL token is dropped at a particular block height on the Cosmos Network.

Say, there are 10 participants, each with 100 ATOMs delegated to any active validator for the StakeDrop on the Cosmos Network. This means the total stake participating in the StakeDrop at this height is 1,000 ATOMs.

Now this 1 $MNTL will be distributed amongst all the participants of the StakeDrop as rewards for this particular block height.

Each participant will therefore receive 0.1 $MNTL at this block height. The calculation is shown below:

Total addresses participating in the StakeDrop by delegating their ATOMs = 10 *(each staking 100 ATOMs, for example)***

This means the number of $MNTL earned per address clearly depends on the following parameters:

How Does It Work?

\(B\) = Approximate total number of blocks in a campaign

\(Z\) = Total number of $MNTL tokens allocated to the campaign

The number of tokens dropped per address (at a particular block height) depends on the following key parameters:

\(N1\) = Number of tokens delegated through a particular wallet

It’s important to note that the specifics of these parameters will vary from network to network.

The time period of the campaign in seconds = 86,400 x the number of days of a campaign

The total number of $MNTL tokens dropped at a particular block height for delegating to any active validator in the StakeDrop can be calculated as:

When Do Users Start Receiving Rewards?¶

The Magic Transaction is considered valid only after the token holder has staked their assets on the network.

Liquidity providers on Osmosis have been integral supporters of AssetMantle. Therefore, the Mantle team decided to allocate the 30 million $MNTL (the largest part of the MantleDrop) to the Osmosis LPs as a token of gratitude.

The Osmosis MantleDrop will be spread across 10 liquidity pools and will comprise 30 million $MNTL tokens in total & is the largest part of the MantleDrop campaign.

The following are the 10 eligible pools that would receive the Osmosis MantleDrop:

These pools reflect some of the best projects built within the Cosmos ecosystem, the Mantle team is proud to support such an incredible group of projects. To claim the Osmosis MantleDrop, users are required to complete the following during the 60-day claim window starting from TGE (18 April 2022):

The amount of allocated $MNTL tokens can be calculated as follows:

Further, as a precautionary measure and to encourage a fair and even distribution, the token distribution is capped at a maximum of 750 $MNTL per wallet.

To welcome OpenSea users to the Cosmos ecosystem, the Mantle team decided to airdrop 9 million $MNTL tokens to users who have traded (buy/sell) a minimum volume of 1 ETH.

The amount of allocated $MNTL tokens can be calculated as follows:

In the spirit of being a creator-centric platform, the Mantle team has decided to support a handpicked group of extraordinary creators with live interactions, early access to the platform, and 12 million $MNTL tokens reserved to be airdropped.

The following shows the lockup period and the vestign period for Mantle tokens ($MNTL) from the Token Generation Event (TGE). 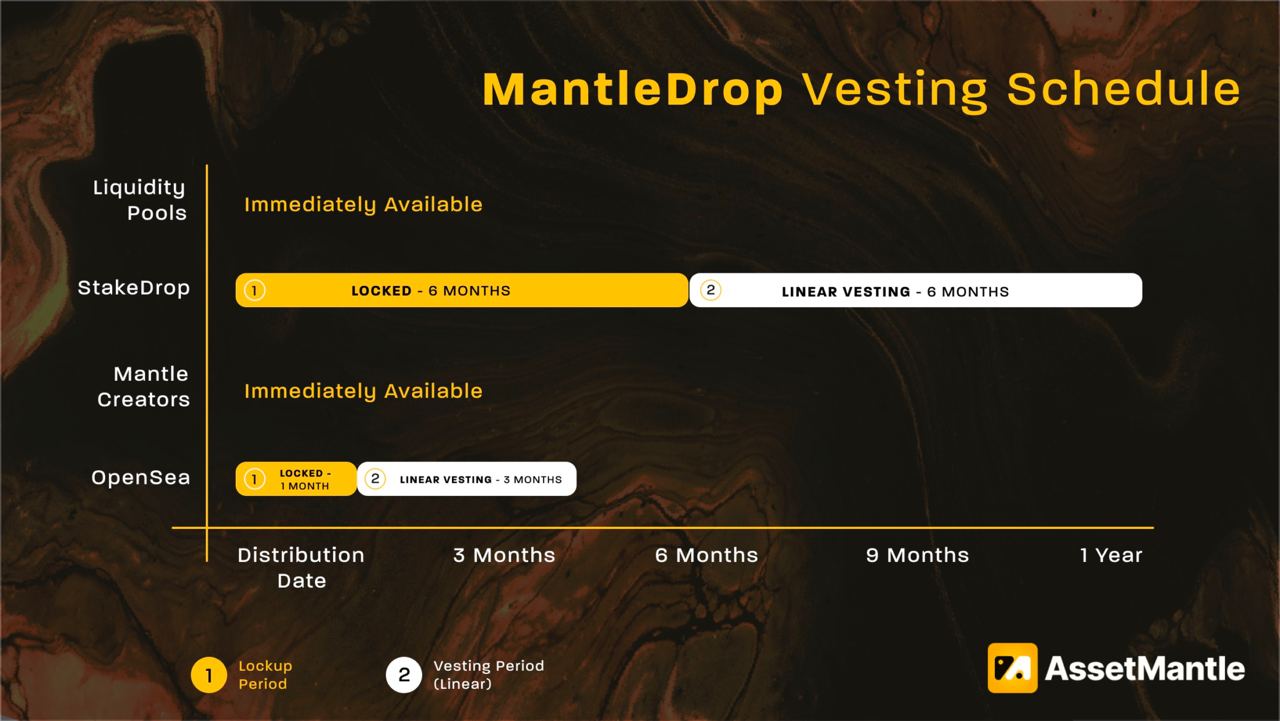 Mantle tokens are immediately available from the TGE for Osmosis Liquidity Providers.

The claim period for LPs is 60 days from the TGE.

For wallets participating in the StakeDrop campaign, the $MNTL rewards are locked up for 6 months post which they are linearly vested for another 6 months.

Mantle tokens are immediately available post the TGE for Mantle Genesis Creators to encourage and support them in their endeavour to create and launch lasting and value-adding NFT prodjects.

$MNTL would be locked up for 1 month from the TGE following which they will be linearly vested for 3 months for OpenSea users.